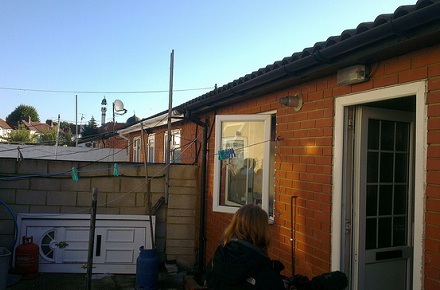 Ministers have launched a major clampdown on rogue landlords to bring an end to suburban shanty towns that trap vulnerable people in dangerous living conditions.

Housing Minister Grant Shapps and Immigration Minister Damian Green launched new guidance to councils making clear the wide range of powers at their disposal to shut down so-called ‘beds in sheds’ that blight entire neighbourhoods and take action against other bad practice by landlords such as overcrowding and poor maintenance.

Mr Shapps and Mr Green saw the evidence for themselves when they attended an early morning visit on a suspected rogue landlord’s properties, and witnessed the squalid conditions the ‘tenants’ paid hundreds of pounds a week to live in.

While visiting six properties, officials from Ealing Council and the UK Border Agency encountered 39 individual tenants, 22 of whom were illegal immigrants:

The new guidance highlights the range of actions councils can take to clamp down on rogue landlords once and for all. These include:

Thousands of sheds and outbuildings are being rented out illegally to vulnerable migrants by ruthless landlords who charge them extortionate rents to live in cramped conditions.

These ‘tenants’ can often find it difficult to return home quickly with some having destroyed their passports to avoid removal often leaving them to either live in these outbuildings or face living on the streets.

“It’s simply unacceptable that people are living in squalid, unsafe accommodation provided by landlords more interested in a quick profit rather then their basic responsibilities.

“The actions of these rogue landlords are helping fuel illegal working and benefit fraud and creates a shadow housing market that carries dangers to peoples health as well as community relations.

“I want to see all agencies from councils to the police and the UK Border Agency using the full range of powers at their disposal to work together on a national clampdown towards ridding our communities of this problem once and for all.”

“Operations like this show our determination to do whatever is necessary, working alongside local authorities and police, to enforce our laws against those who are in the UK illegally.

“The UK Border Agency continues to gather intelligence about those illegally in the country. Those with no right to be in the UK must leave the country. If they need help to leave the country voluntarily we will offer it but if they refuse we will enforce there removal.”

Today’s guidance is backed up by the recent allocation of £1.8million to councils earlier this year to tackle the issue and flush out those landlords renting out ‘beds in sheds’.

‘Dealing with rogue landlords: A guide for local authorities’ is available here.